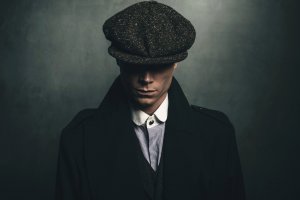 While you might think we’re going to start divulging details of companies who’ve been outed by television shows like Cowboy Builders, Don’t Get Done Get Dom, or Rogue Traders, you’d be wrong…

We’re talking about a far more popular organisation – a company who are searched for more than 365,000 times a month on Google – one that won a host of major government contracts at the turn of the 20th century and which has recently re-entered our lives.

The Shelby Company Limited, a fictional business which became notorious in the streets of Small Heath, Birmingham, through a combination of ‘hooky’ bookmaking, racketeering, and one of the most lucrative public sector contracts of the time in Britain, can surely lay claim to title of Britain’s least legitimate public sector contractors…

The image portrayed of tendering at this time is very different to what it is now. The Prime Minister of the time, Sir Winston Churchill, utilised the help of Inspector Campbell to recruit well-known gangster and war veteran Thomas Shelby for an assassination contract.

Despite knowing full well of Campbell’s plan to kill Shelby once the Crown had made use of him, Churchill was more than happy to commission it. This was until Sir Winston Churchill discovered Campbell’s intention to have Shelby executed at the hands of the feared ‘Right Hand’, a loyalist organisation from now-Northern Ireland.

Not only did Churchill protect Shelby from the brutal murder he was about to face, but he also granted him an import-export licence, ensuring that he could transport goods throughout most of the British Empire. Years later, as the story reveals, Shelby is still working for the Crown, carrying out assassinations in exchange for significant sums of money.

As we’ve previously mentioned, Thomas Shelby and his organisation the Shelby Company Limited would undoubtedly go down as one of the most unsavoury public sector contractors ever – they won their contracts in questionable circumstances, they carried them out in a dubious fashion, and their methods of retaining them left much to be desired. That said, while the dealings of the Peaky Blinders might be fictional, for reasons such as the avoidance of exploitation and poor social value in real life, there exists a set of guidelines, a blueprint of what public sector contractors must be and must do, too.

A term that has actively been used for many years, the requirement to consider social value in any procurement exercise was introduced back in 2012. That said, as we navigate the future, the idea of social value will only become more important, with the UK Government focusing on it. Social value is one of the concepts stressed in the Green Paper ‘Transforming Public Procurement’, which forms the blueprint for the likely future of public procurement in the UK. The Government has also published a Social Value Model, which sets out a menu of social value goals which government departments – and, increasingly, other areas of the public sector ‒ should include in their procurement.

In layman’s terms, social value is a commitment to ensuring that procurement creates benefits for people, stakeholders in the procurement and society. This could be through focus on environmental issues such as ensuring low-carbon practices are being prioritised or investment in staff wellbeing, the local economy, job creation for disadvantaged groups or improvement of local facilities, among many others. Ultimately, social value is about looking after the people and things around us that could be damaged or exploited by public sector contracts. Encouraging social value goes in hand in hand with ethical sourcing.

When discussing ethical sourcing, Tracker’s sister brand Delta eSourcing noted: “Public sector bodies, now more than ever before, understand that cost and quality are only a part of the overall package, and not only do they need to be seen to be doing more in the community, but they need to follow through on it to satisfy an increasingly savvy mass of potential critics.”

A blog dissecting the inner workings of ethical sourcing by the e-tendering platform goes on to add: “Given that procurement exercises can involve complex relationships between many different organisations, there is potential for many unethical practices to become involved somewhere in supply chain. These can range from illegal activities such as modern-day slavery and corruption, to broader issues such as disregard for the consequences of climate change.

“Ethical sourcing can support buyers to avoid these pitfalls as it focuses on conducting sourcing activities at the highest possible standards of responsible, sustainable, environmental, and socially aware business practice.”

Fostering ideas of social value and ethical sourcing combined with the fact businesses now must face a closely scrutinised procurement process that ensures the most appropriate organisation wins a contract based on a number of different variables would almost certainly ensure that Thomas Shelby’s luck would be all but out. That said, we’re fairly confident The Shelby Company Limited will still be able to make a killing on BBC1.

If you’re keen to find out more about how to tender to the public sector, register for a free trial today and unlock a world of opportunity.