When it comes to renewable energy, the technology has been advancing every year and with that has come increased capacity to produce energy for homes and businesses.

In Scotland especially, renewable energy has boomed and has overtaken nuclear power as the country’s principal power source. Analysis by Scottish Renewables has said that in Scotland wind farms, hydro power plants and other clean technologies provided the single largest source of electricity to the country in the first half of 2014.

Four reasons why Scotland is leading the way in the renewable energy sector:

Why is Scotland doing so well in the renewable energy sector?

In terms of European or even global standards, the natural resource base for renewable energy in Scotland has been classed as extraordinary as it has the most important potential sources: wind, tide and wave.

In laymen’s terms, the weather in Scotland, along with the commitment to developing technology, enables the country not just to embrace renewable energy, but to excel in the sector. Many people may say that the weather in Scotland can be very wet and windy; however, this makes the conditions perfect for energy sources such as wind, tide and wave to be extremely worthwhile and full of potential. 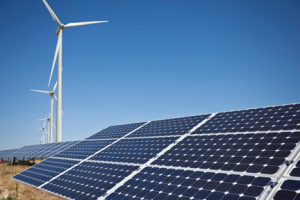 When it comes to wind, Scotland has a history of strong wind records which make it the perfect location to develop and excel in wind energy. According to Scotland Info, the highest gust recorded at a low-level site was 123 knots (142 mph) at Fraserburgh in Aberdeenshire on 13 February 1989. The highest gust recorded at a high-level site was 150 knots (173 mph) at Cairngorm Automatic Weather Station on 20 March 1986.

It’s clear to see that Scotland’s weather is perfect to make the most out of renewable energy.

Investment in renewable peaked in 2014 which is a good sign for businesses looking to invest in the coming years.

What developments are we seeing in our database for renewable energy contracts across the UK?

The renewable energy sector has been growing at a positive rate year on year and this is forecast to continue.

To really get the ins and outs of such data, see for yourself how Tracker’s Tender Alerts service brings current opportunities in renewable energy directly to you. In addition, our archive data can trace back previous renewable energy investment to see how the sector is growing and help you to identify emerging market trends. 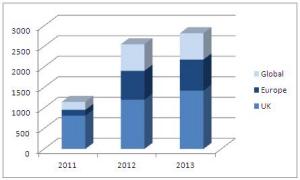 It is essential to keep up to speed with progress in the renewable energy sector as electricity from renewable sources has already eclipsed other energy sources in Scotland, a trend which could transfer to other countries in the UK. Renewable energy is set to grow to 2020 and beyond, meaning that this is an ideal time for your business to benefit from advances in renewable energy. To find out how Tracker can help, start your free trial today.