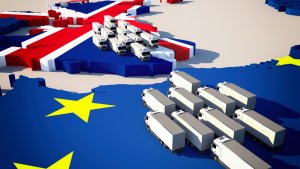 Brexit has dramatically changed the UK import and export dynamic.

Pre-Brexit trade predictions estimated a 15% decline in UK imports and exports. However, several factors skewed this outcome. First, UK goods trade to the EU fell by more than 30% at the start of 2020 (Compared to 2019) and didn’t recover.

The extended transition period caused severe delays, offset further by the pandemic. As a result, by the end of 2021, despite positive growth indicators in the previous quarter, GDP growth slowed to less than 2%.

Yet, the extent of Brexit’s impact was ill-predicted. As we see, the ongoing effects of this change have plummeted the UK into an economic downturn.

As we’ll discuss, tender contracts are becoming an increasingly viable option for businesses to attract new suppliers and contracts.

However, many businesses may not know where to turn when it comes to tender contracts. So, we’re exploring some of these issues and potential solutions.

How Much Did We Depend on European Businesses?

Typically, the UK imports more than it exports. So the UK has to offset this trade deficit to keep the economy stable. Pre-Brexit, the UK trade relied on the EU to fulfil 51.4% of this deficit.

However, the beginning of 2021 marked a sharp drop in this trade, falling by over 30%, so these figures are no surprise.

Under EU membership, the UK gained from mutually beneficial trade across the EU Market. For example, under the pinions trade agreement, the UK profited from the EU customs union, single market, and VAT area.

The UK also relied on the EU for supplying labour. As a result, the UK labour shortage has been the subject of significant media attention since Brexit. Most recently, the summer of 2021 saw a supply chain backlog resulting from labour shortages.

The number one factor is attributed to a lack of drivers, with the haulage industry estimating a 100,000 drivers’ shortage.

The UK Road Haulage Association, in part, attributes this shortage to many European drivers based in the UK travelling to their country-of-origin post-Brexit, and not returning.

In addition, the UK’s current immigration rules include a points-based system to encourage skilled workers, meaning EU citizens no longer have preferred treatment.

As vacancies rose, the haulage driver shortage created tension between the industry and the government. Recent data shows that more than one-third of businesses were short of workers overall. So what has this meant for meeting the UK’s domestic demand?

Has the Situation Changed Drastically?

The EU customs Union offers standardised tariffs on non-EU territories and no tariffs for internal trade. Under this regulation, there were no custom duties between member states.

Similarly, Inside the EU VAT area, VAT was paid in only one country. This meant VAT was levied on exporters rather than importers. Meaning the UK could extract VAT-Less imports.

At the heart of these trades was membership in the single market. This gave businesses access to over 450 million consumers. Moreover, it allows for leaver unit costs of goods, low unit labour costs and competitive corporate tax rates of only 15%.

The shortage of workers and changes to regulation have caused an 11-month customs backlog. There aren’t enough skilled workers to administer these changes. With small to medium-sized businesses suffering the worst disruptions.

Many have experienced low trade volume or have had to stop exporting altogether.

As a result of decreasing exports from the EU, we see UK trade turning to non-EU countries to manage their trade deficit.

The UK government has been negotiating trade deals with Australia, New Zealand and the US to meet their domestic demands.

The government has begun to diversify its trade services. For example, it became mandatory for all public sector organisations to advertise their procurement opportunities over £10,000 to public and private businesses.

Public sector tendering contracts have many benefits. From more transparent supply chains to open and accessible contacts, the future need not look so bleak for businesses.

Is There a Clear Plan for the Future?

According to the Center for Social Justice, the UK government spends more than a third of its total expenditure on procurement contracts. Previously, these contracts were regulated by EU law.

However, post-Brexit, the government released its green paper outline to redesign the contract procurement system.

This opened the door for public businesses to take advantage of public sector contracts. In addition, it significantly speeds up and simplifies the procurement process.

This provides more businesses opportunities to engage with the domestic and international markets, mainly if firms are currently exporting to Europe and struggling with Brexit impacts.

Are You Ready to Utilise Tender Contracts?

Why not take advantage of these transformations? Every year, Tracker shares thousands of real-time tender contracts on its platform.

Moreover, you can access the latest information on public sector market trends with smart business insights.

In addition, we provide detailed and meaningful intelligence on how to engage with public sector buyers. Tracker is currently offering a free trial of our premium service.

With the free trial, you get alerts on the latest contracts and awards, market and competitor insights, access to our contract archive, expert advice from leading public sector experts, and more.

So, what are you waiting for? Join today to find out what Tracker can do for your business.