NEWS The Public Sector 2020 and Beyond Report 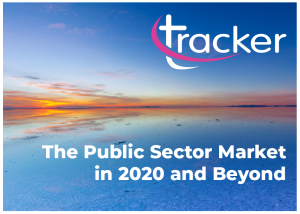 With impending end-of-year festivities, December is not typically the month of maximum productivity – its very atmosphere is the opposite of business as usual. However, recent research conducted by Tracker Intelligence’s parent company, BiP Solutions, has shown that December is a critical time of year for businesses. Instead of taking their feet off the gas, businesses should be taking advantage of the quiet time of year to get ahead of their competitors and prepare for procurement success in the following months.

The release of BiP Solutions extensive report on ‘The Public Sector 2020 and Beyond’, explores the key factors that can help suppliers engage with this huge, diverse public sector market in the coming months, while your competitors are hibernating.

Squeeze the most out of opportunities – when your competitors aren’t

‘The Public Sector 2020 and Beyond’ report details the key political, social, economic and technological factors affecting the market, and is designed to help Tracker customers grow. It will be updated regularly throughout the General Election campaign, as well as immediately after the General Election results.

With the most recent Brexit extension set to end on 31 January 2020, the report takes a closer look at the impact of politics on the future of public spending ahead of the General Election on 12 December. The timing of the General Election is unusual, being the first to be held in December since 1923. However, this is an advantage for businesses working with the public sector, since any distraction caused by the Election can be absorbed in the usual frenetic run-up to Christmas.

The research conducted by BiP Solutions into contract notice activity during the last two elections (7 May 2015 and 6 June 2017) reveals that there was no significant downturn in the volume of new notices published immediately prior to polling day, compared to that in non-election years.

BiP Solutions research also anticipates that the current General Election campaign will have no significant bearing on pre-election contract notice volumes. For organisations concerned with the impact of the current political climate on growth in procurement, the evidence suggests that the correlations between the two are more positive than you might presume.

Smart suppliers should use December to research future opportunities and build their potential future opportunities and build their engagement strategies while their competitors are out of office. Your hard work and strategic planning will pay off, come the new year, when the preparation you have done using Tracker’s wide array of invaluable business intelligence tools will ensure you are well equipped to reap the benefits of the first quarter upturn.

Tracker Intelligence is dedicated to helping you achieve maximum productivity over this period, to help you get the best possible start to your new year.

Download BiP Solutions’ report ‘The Public Sector 2020 and Beyond’ and check back for updates throughout the General Election period.