Has COP 26 Fuelled Even More Greenwashing Among British Businesses? 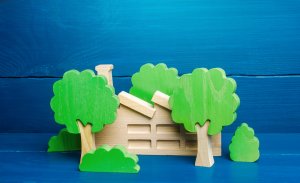 While thousands of delegates from 190 nations across the globe descended on the Scottish city of Glasgow in early November to agree environmental action plans that would see considerable reduction in greenhouse gas emissions over the next number of years, activists around the world questioned the sincerity of the pledges.

Many of us will have seen global news channels reporting on protesters at the event who staged demonstrations and marches throughout the city and around the world at the same time as the event, with the largest, which took place in Glasgow itself, attracting more than 100,000.

Forcing delegates’ hands to take further action obviously fulfilled a certain amount of the reasoning for the protests. However, part of the fire was fuelled by a bid to stop these leaders from greenwashing. Government officials, business heads, media executives – they’ve all been guilty of it, and the climate activists have had enough.

Greta Thunberg commented: “The COP has turned into a PR event, where leaders are giving beautiful speeches and announcing fancy commitments and targets, while behind the curtains governments of the Global North countries are still refusing to take any drastic climate action.”

Gregor Robertson, Former Mayor of Vancouver, and author of the article in Fortune, added: “Climate commitments, no matter how well intentioned, mean nothing unless the impacts and emissions are tracked by a transparent and accurate system.”

With this in mind, we want to explore the concept of greenwashing and how it’s impacted British businesses in the wake of COP26. 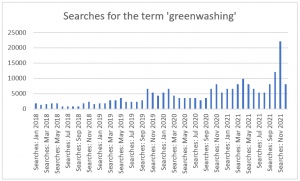 Fig. 1 details the average monthly searches for the term greenwashing over the course of the past four years – during the COP26 event in November it is clear that the number of searches grew considerably, peaking at 22,200. (source – Google Ads)

Described by the Guardian back in 2016: “the term “greenwashing” was coined in the 1980s to describe outrageous corporate environmental claims. Three decades later, the practice has grown vastly more sophisticated.”

The newspaper article from which the aforementioned definition was taken detailed a 1980s television commercial in which oil company Chevron highlighted their staff protecting bears, butterflies, sea turtles, and more. The company has since become synonymous with the term greenwashing and has in many cases been referred to as the gold standard of it.

In 2022, meanwhile, the marketing spin that has been actively used to persuade consumers of organisations’ good will and positive action when it comes to the environment is far more ingrained in everyday business life and, in many respects, far more complex to recognise.

There’s no denying that COP had the eyes of the world on it – more than 1.3 million Instagram hashtags, 143k followers of the official COP26 Conference page on LinkedIn, and more than 100 million views on TikTok – but marketers knew this.

Following the conclusion of COP26, a survey revealed that 75% of millennial consumers consider sustainability before committing to a purchase. With this generation set to hold more leadership positions than Boomers by 2025, the impact of this within business will be significant.

20% of business leaders have switched to sustainable branding thanks to consumer pressure while 36% admitted that going green creates more opportunities for growth. ‘Smart marketers’, as they are being described, will certainly have recognised this opportunity to reposition their brands and capture a significant chunk of a new audience.

In order to find out the impact that COP26 had, we thought we’d delve into each of the top ten biggest businesses in the UK according to the FTSE100 top 30.

Using each of the businesses’ Twitter accounts, we analysed the number of tweets positively relating to the environment 30 days before COP began on 31st October and 30 days after it finished on 12th November. Ultimately, we wanted to investigate whether or not the climate change event which took place in Glasgow actively encouraged an upturn in the amount these companies were talking about, and promoting their work within, the environment. 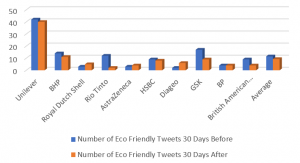 As you can see from the table above, all but two of the top ten businesses spoke more about the environment and the likes of net zero in the build-up to the event compared to once it had finished.

This suggests that the greenwashing many expected from these ‘smart marketers’ in a post-COP26 world was not pursued.

Choosing to avoid such an option will help any brand in the long run, particularly when it comes to retaining customers. Businesses which, in the past, have fallen foul of greenwashing have significantly damaged their reputation and been forced to settle considerable figures in court. Take the American-Multinational Retail Corporation, for example – they were forced to pay more than $1 million to settle a lawsuit back in 2017 after they were found guilty of greenwashing.

For businesses in a post-pandemic Britain, there exist a host of opportunities within the public sector but, they should bear in mind that writing a tender response that is awash with marketing propaganda like greenwashing will inevitably fail.

While businesses might think that catering to a consumer through environmental promises is the only way to succeed, acting with trust and transparency is certainly preferable.

If you’re interested in finding out more about the current opportunities available within the public sector then you’ve came to the right place. Book a free demo today and begin your journey with some of the most lucrative public sector contracts.