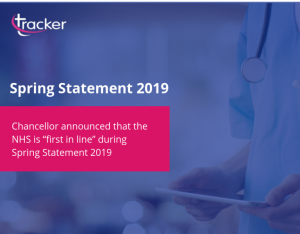 The Chancellor of the Exchequer, Phillip Hammond, revealed the Government’s Spring Statement 2019 on 13 March.

During his speech he announced plans to improve cancer and mental health care, and a transformation project around GP services.

Spending Plans for the NHS

Mr Hammond will launch a full three-year Spending Review before the summer recess, which will be concluded and announced alongside the Autumn Budget. The Spending Review will set departmental budgets, of course including the NHS.

During his speech, Mr Hammond said:

“We have made our biggest choice on public spending:

Last year, to mark the 70th birthday of the NHS, Prime Minister Theresa May announced that funding for the NHS in England would be increased by £20.5 billion by 2023/24. As healthcare spending is devolved across the UK, central government is only responsible for how NHS spend is placed in England.

With prospective business within the NHS out there and no signs of government investment slowing down, Tracker’s business intelligence tools can support businesses looking to grow their portfolio of clients and increase their share of public sector spend in this field.

To find out more about NHS spend, visit our Healthcare Tenders page.