NEWS UPDATE: What the London airport expansion debate could mean for UK business 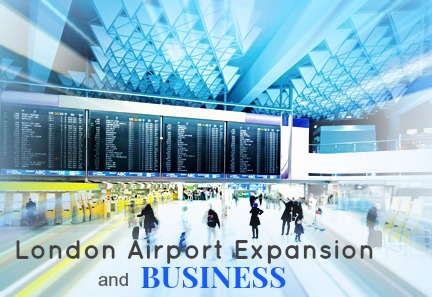 [BREAKING]: This story has been updated following the publication of the Airport Commission recommendations. Read on for more details!

On Wednesday 1 July, the Airports Commission will deliver a report on the long battle surrounding London airport expansion.

Amid speculation that the report will favour expansion at Heathrow but be inconclusive, this blog from Tracker looks at the pros and cons of expansion, why the issue is so politically charged and what the report’s findings could mean for UK business.

As far back as the Conservative Government of the 1970s, airport expansion in London has had a troubled history.

At the heart of the battle is a constant debate between business leaders advocating for more airport capacity and environmentalists warning against increased pollution and noise disturbance.

To deal with the issue, the Airports Commission was established by the Department of Transport in September 2012 to set out how the United Kingdom could become an international hub for aviation.

Chaired by the economist Sir Howard Davies, in 2013 the Commission announced that London did in fact need an additional airport in order to secure the UK’s status as a major economic power.

What are the options?

Last October the Airports Commission set out its shortlist of three options for expansion.

While no official plans have been announced, it is expected that the Commission will at least in part support the first option – an additional runway at Heathrow.

The business case for expansion

Business leaders have long put forward the case that expansion would allow London to become the world’s leading hub for air passenger traffic, and many have already announced their support for Heathrow expansion.

Expanding Heathrow would create new routes to Asia, ease the delays which have long-plagued the airport and give local businesses a much-needed boost as a result of the increased traffic.

Simon Walker, Director General, Institute of Directors said: “Politicians have sat on their hands for too long already. While it may be tempting to kick this difficult decision into the long grass, businesses are crying out for action. Demand for air travel is only going one way, and further delays will heap even more frustration onto companies who have witnessed nearly a decade of indecision.

“The government likes to talk up its plans to boost exports and help companies enter new markets. But if travelling around the world becomes harder and more expensive, businesses could be cut off from emerging economies and Britain will quickly fall behind its international competitors.”

The Airports Commission have released their full report on the London airports expansion debate.

The Commission has backed a third Heathrow runway, saying it will add £147bn in economic growth and 70,000 jobs by 2050.

To make expansion possible the Commission recommends a comprehensive package of accompanying measures which would make the airport’s expansion more acceptable to its local community, and to Londoners generally.

The package includes a ban on night flights, more reliable respite for overflown communities, a legally-enforced “noise envelope”, a statutory independent aviation noise authority, and a noise levy to fund a far stronger and more generous set of compensation and mitigation schemes. New measures to ensure acceptable air quality around the airport will also be needed.

With a decision on the issue of London airport expansion now reached and with the Conservative Government in a position to proceed with their infrastructure investment plans, the opportunities on offer for businesses in all sectors will also grow.